Washington agrees to hurry with Nagorno-Karabakh 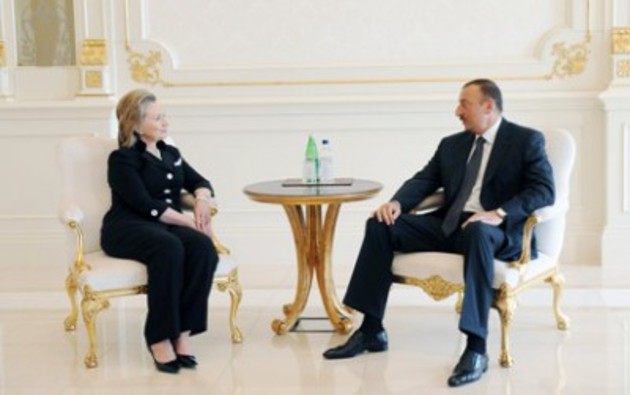 The visit of US State Secretary Hillary Clinton to Baku and Yerevan
did not reveal the confidentiality of the negotiation process between
Armenia and Azerbaijan on Nagorno-Karabakh. Clinton's position was
totally neutral.

Washington has paid more attention to Armenian-Turkish rapprochement
in the last 18 months, easing its efforts on Nagorno-Karabakh. The USA
was surprised to see that Turkey can forge a friendship with Armenia
only after the direct interests of Azerbaijan are taken into account
over the Nagorno-Karabakh issue. Yerevan and Ankara failed to achieve
rapprochement and the diplomatic talks froze. The visit of Clinton was
to adjust the priorities and reconsider the US position on the order
of resolving the South Caucasian conflict.

Baku seems to be ready to make hard decisions in the negotiation
process, ones based on the Madrid principles and the declaration of
the three presidents of the mediating countries - USA, Russia and
France. Azerbaijani President Ilkham Aliyev asked the US to aid in
solving the old conflict as soon as possible. After the meeting with
Aliyev on July 4, Clinton said that she hopes for progress in the
specification of the general principles of a Nagorno-Karabakh
settlement and a signing of a final document.

She recognized the progress of the process after the meeting between
the presidents of Armenia and Azerbaijan - Serzh Sargsyan and Ilkham
Aliyev under the mediation of Russian President Dmitry Medvedev in St.
Petersburg two weeks ago. The progress in settlement means that
Washington, together with Moscow, managed to convince the president of
Armenia to start work on the Madrid principles. The principles involve
the return of the territories occupied by Armenian military formations
around Nagorno-Karabakh; the intermediate status of Nagorno-Karabakh
providing guarantees of security and autonomy; a corridor connecting
Armenia with Nagorno-Karabakh; the return of Azerbaijani refugees to
Nagorno-Karabakh and the determination of the final legal status of
Nagorno-Karabakh.

It should be noted that after talks with Clinton, the Armenian
president went for another meeting with Medvedev. The EurAsEc summit
in Astana comes in handy, allowing for talks between Medvedev and
Sargsyan. Their meeting will be very fruitful, taking into account the
uncompromising attitude of Armenia towards the practical realization
of the Madrid principles. The co-chairs of OSCE Minsk Group, who are
also in the region, had meetings with each president and now they are
to meet with the foreign ministers of Azerbaijan and Armenia in
Kazakhstan, the chair country of the OSCE. This meeting may see the
final agreement of Yerevan to go according along with the road map
drawn up by the mediators of Nagorno-Karabakh settlement and soon
Clinton will a detailed plan for solving the conflict.