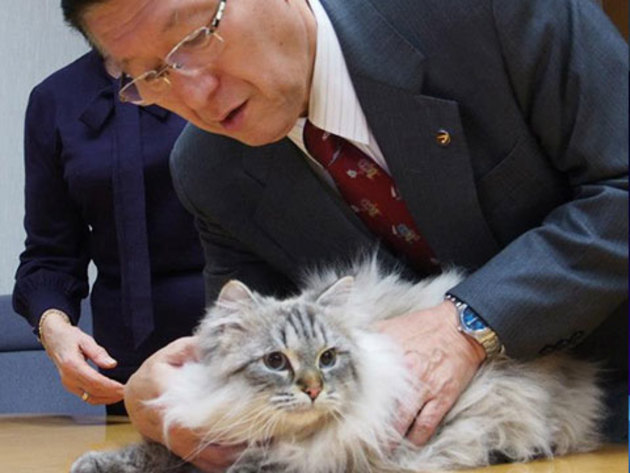 Mir, the Siberian cat, gifted by Russian President Vladimir Putin to governor of Japan’s Akita prefecture Norihisa Satake in February 2012, was put into house quarantine, because these animals are also threatened by the coronavirus infection, the governor said.

"We were very disturbed by the reports that cases of coronavirus infection were registered in house cats in the U.S.," the governor said. "So we made sure Mir does not contact anyone besides our family. We very much hope that this situation ends soon, and the infection threat stops make both people and animals suffer," TASS cited him as saying.

"It has been eight years since Mir has become a part of our family," the governor said. "He has perfect appetite, he is strong and happy, and he has a calm personality," the governor disclosed. "Mir lives perfectly with six other cats that live in our house. This is a special creature for me: my soul rests when I see his face."

In summer 2012, governor Satake gave Vladimir Putin a puppy of the Akita Inu breed, which the prefecture is famous for, as a sign of gratitude for help that Russia provided following the catastrophic natural disasters of March 2011 - the strongest earthquake in the history of Japan, which caused incredibly powerful tsunamis that led to Fukushima-1 Nuclear Power Plant disaster. The puppy was named Yume (Dream).

In response, Moscow gave a furry kitten of grey color, which Japan named Mir. This gift was chosen after Kremlin discovered that the governor prefers cats to dogs. Due to strict Japanese laws, Mir had to undergo his first quarantine in the Tokyo’s Narita airport’s special zone in 2012. For six months, employees of the Russian embassy visited the cat, bringing him presents - food and toys. After the quarantine, the cat settled down in the governor’s house. Mir lives in the governor’s house, along with other six cats.

The bubonic plague is back again