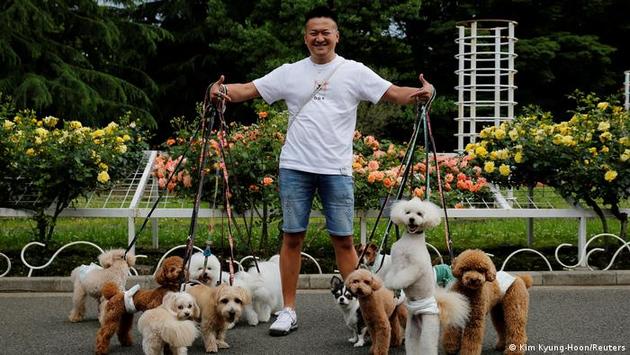 As Japan's population crisis continues to worsen, more households are opting for dogs, cats and even exotic pets. Loneliness and boredom during the coronavirus pandemic have helped fuel the trend, Deutsche Welle writes. The coronavirus pandemic has worsened Japan's already worrying population decline. Recent statistics from Japan's Internal Affairs show that there were just 14.93 million children aged 14 or younger on April 1, a decline of 190,000 on the same date a year ago and the lowest annual figure since 1950.

In contrast to Japan's dwindling birth rate, household pets are on the rise. There are some 20 million cats and dogs registered across the country, and an additional 60,000 pets joined households in 2020, according to the Japan Pet Food Association. Chris Dunn, an executive of the Japan branch of the Pet Planet food company, told DW that demand for pets has soared since the government declared the first state of emergency in April last year.  "There has been a clear increase in sales in the last year and that can only be because more people are buying dogs and cats. They are willing to spend money on giving them the best food available," Dunn said, adding that sales have been "even better" in the last 12 months.

Dunn said the reasons behind the uptick in pet sales were quite clear. "For the last year, people have had to spend a lot of time at home and very quickly they have become both bored and lonely," he said. "They wanted some sort of distraction and, at the same time, companionship — a pet is the perfect solution to those problems." Dunn said dogs also gave families opportunities to go outside and get some exercise. He thinks that the biggest reason why people in Japan are buying pets is for psychological support, whether they are doing so consciously or not. But there are several challenges when it comes to owning a pet in Japan. Many people in urban areas live in apartments with no gardens or available green spaces. The pet stores' solution to this has been to promote animals who are more suitable in small, indoor spaces.

Pet accessories on the rise. Yuka Ito has a hamster who is nearly 3 years old at her home in Yokohama, where her two children, Rio and Dan, are in charge of taking care of it.  "I think it is important that children have a pet because they learn about responsibility," she said. "They have to feed it, change its bedding and make sure it is healthy." "A pet does mean that it's difficult to go away for more than a couple of days, of course, but there are more benefits than downsides," she said. "My husband always tells me that he's happy when he gets home from work and the children are sleeping, but the hamster is at the bars of its cage to greet him," she said. Ito also admits to occasionally spoiling her hamster, Blanc, with sunflower seeds.

Many pet owners in Japan come from middle-to-high-income households, so the surge in pet sales has been followed by the emergence of a bewildering array of accessories for animals.  Pet shops in Japan often stock a diverse range of clothing for dogs, from rainwear to fancy dress outfits. In addition to leashes, collars, toys and animal beds, the most popular products are strollers for taking pets to the park.

Dunn said he had also noticed that people are seeking "more exotic and unusual animals as pets." "It may be a form of one-upmanship, but they are no longer satisfied just to have a dog, so they are buying very expensive fish, rare reptiles or birds," he said. Earlier this month, police in Yokohama were called when a 3.5-meter (11.55-foot) yellow reticulated python escaped from a tank in its owner's apartment. The disappearance of the 10-kilogram (22-pound) snake caused consternation in the neighborhood and made local news headlines. The snake was finally discovered two weeks later hiding in the man's attic.

There is also a constant demand among collectors for rare and protected animal species, typically lizards or insects. Customs officials at Japan's airports regularly report the arrest of someone caught attempting to bring endangered species into the country.  Animal protection groups have also expressed concern over the pet boom during the pandemic, with some warning that owners need to be reminded that their animals cannot be treated as disposable toys once life returns to normal and that they must continue to care for their pets.

The bubonic plague is back again