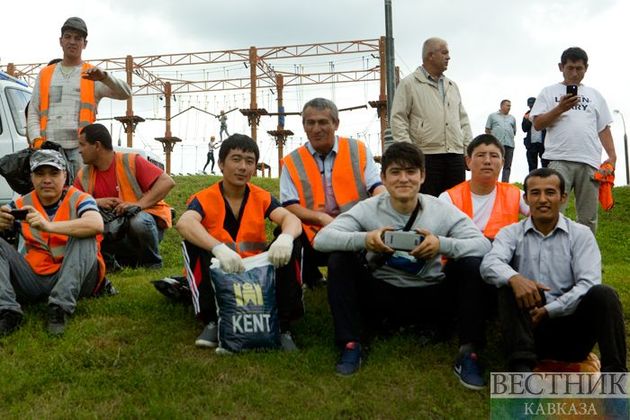 Migration flows to Russia that decreased due to the coronavirus pandemic, are gradually recovering, but it is difficult to predict whether they will return to the previous levels, Ekaterina Vinnik, an analyst of Vestnik Kavkaza, said in the Natsvopros program on the Vesti.FM radio station.

Natsvopros is a weekly program on Vesti.FM discussing various aspects of national relations, primarily in Russia. Today's program was dedicated to migration issues.

The expert recalled that migration, in particular labour migration, is an extremely important economic factor for Russia, ensuring the stable development of several sectors, including agriculture, industry and services. "In Russia, migrants make up about 12% of the labour force, their contribution to GDP is estimated at 7.7%. That is why the importance of migration flows and trends leading to their change must be monitored and taken into account," she explained.

"According to Rosstat, the growth of migrants in 2020 decreased by three times compared to 2019 (that is, the indicators decreased from 116,000 to 38,000 people). Although, even in April, when the borders were already closed, the number of arrivals did not fall to zero. As of November 1, 2020, 1.3 mln people worked in Russia under patents, in the same period of 2019 their number amounted to 1.7 mln. In general, in 2020, 378,000 people returned to the CIS countries (mainly Uzbekistan, Tajikistan, Kyrgyzstan, Ukraine and Kazakhstan, where most migrants come from)," she said.

Ekaterina Vinnik explained that the outflow of migrants during the pandemic is associated with employment problems. "After the introduction of a high alert regime, up to 70% of migrants in some communities, in particular, Tajiks, were temporarily unemployed. The largest percentage of unemployed migrants was recorded in April - 31%. According to data on labor migration for 2021, for the first two months, the number of migrants registered is two times less than in the same period of 2020, that is, one million compared to two. The Ministry of Internal Affairs reports that almost two times fewer patents were issued. In addition, the number of issued invitations to foreigners and stateless persons has decreased: up to 16,000 people compared to 57,000  in 2020,”  the expert noted.

"Nevertheless, since the end of December 2020, there has been a tendency for migrants to return to Russia. In addition, since April this year, students from a number of epidemiologically safe countries can enter Russia, so the migration flow, in general, will probably increase in the fall," the expert predicts.

"Although it is still too early to talk about the recovery of migration flows to the level that preceded the pandemic, most likely the situation will gradually recover due to the opening of borders and checkpoints. However, we should understand that those labour migrants, in particular, who have left, may not to return, since it is likely that they have already found a new job. In general, much will depend on the economic dynamics in the countries of origin, as well as on the willingness of Russian employers to provide work and some guarantees to hired workers from other countries,” the analyst of Vestnik Kavkaza summed up.

Ekaterina Vinnik on Vesti.FM: ethno-tourism in Russia can become the pearl of the industry

Ekaterina Vinnik on Vesti.FM: Bobrovskaya should focus on the interests of the Ukrainian people