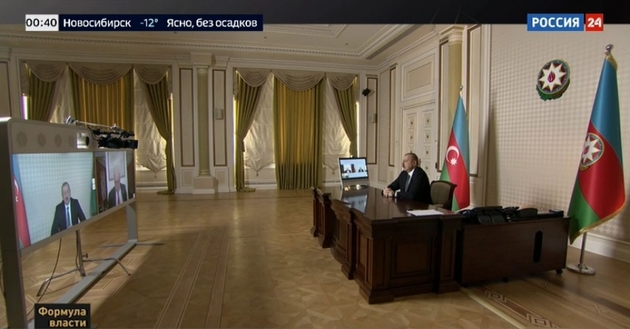 The permanent host of the programme, TASS First Deputy General Director, Mikhail Gusman opened it with ten-year-old footage, in which President Ilham Aliyev shares his country's development plans, which have become a reality over the past ten years.

The program tells about global energy and transport projects implemented at the initiative of Azerbaijan, the country's dynamic development in all areas. Moreover, it describes the growing authority of the country, which successfully chairs international organizations, in particular, the Non-Aligned Movement, which provides great humanitarian assistance to developing countries during the coronavirus pandemic. This fact was highly appreciated by the WHO, reports AZERTAC.

Also, the TV program presents footage of the process of restoring the liberated lands, trips of the head of the Azerbaijani state to the lands of Karabakh.

In the program, Mikhail Gusman especially noted the atmosphere of tolerance towards representatives of various nationalities and religions that has reigned in Azerbaijan for centuries, which, as the host emphasized, he knew firsthand. "Multiculturalism is in the blood of Azerbaijanis," Gusman said.

The actively developing Azerbaijani-Russian relations were also mentioned in the program.

In turn, the head of the Azerbaijani state spoke about the successful relations between Azerbaijan and Russia, expanding in all areas, especially in the humanitarian sphere.

The program was broadcasted both at night air and in the morning, the report says.