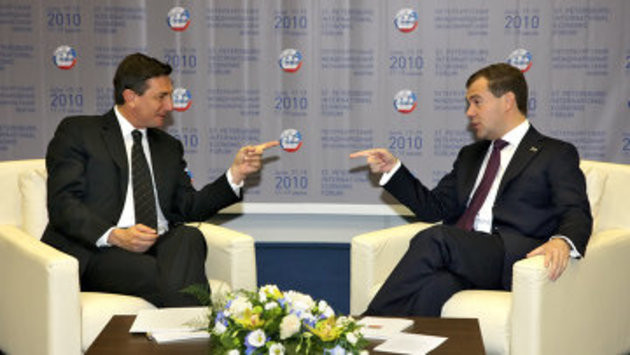 The world’s leading politicians and businessmen have been meeting at
the International Economic Forum-2010 in St. Petersburg. The
participants are discussing the key problems of Russia, developing
markets and world society and ways to solve the problems, RIA Novosti
reports.

At the first plenary session the sides will discuss issues of Russia’s
modernization potential and the country’s goals. Dmitry Medvedev will
have bilateral meetings with the president of Macedonia and the head
of the League of Arab States and will award distinguished scientists
with the ‘Global Energy’ award. He will also meet representatives of
the banking community, the largest US companies, heads of
international innovative corporations and heads of foreign energy
companies.

The Russian authorities will gradually reduce the budget deficit,
Medvedev said at the forum. The federal budget should run an
approximate budget deficit of 4% of GDP in 2011, which will drop to 3%
in 2012.

The Russian president also met Slovenian Premier Borut Pakhor. On 19th
June he will meet the President of France Nicolas Sarkozy. The forum
has three theme blocks: ‘World economy: managing the restoration’,
‘Russia – today and tomorrow’ and ‘View on the future’. Participants
in the forum will discuss the economic changes after the crisis,
managing state debts, forming the energy of the future, prospects of
the gas market and challenges of pension systems in the 21st century.