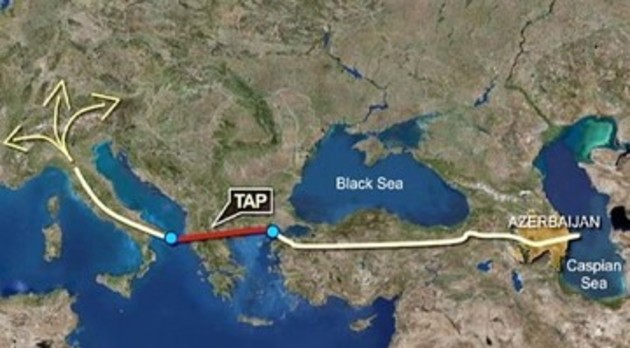 The construction of the TAP pipeline could set an example of what a project developer’s role should be – to build a commercial infrastructure project while mitigating any potential environmental and social challenges, writes Danila Bochkarev for Euractiv. On 15 November 2020, the Trans Adriatic Pipeline (TAP) began commercial operations. The TAP is part of the Southern Gas Corridor, transporting natural gas to Europe from the Shah Deniz II field in Azerbaijan. Connecting with the Trans Anatolian Pipeline at the Greek-Turkish border, TAP crosses Northern Greece, Albania and the Adriatic Sea before coming ashore in Italy.

The $4.5 billion pipeline has a capacity of 10 bcm/year, potentially expandable to 20 bcm/year. It is planned that 8 bcm will be delivered to Italy and 2 bcm to Bulgaria and Greece.

The TAP pipeline project was favoured by the EU’s drive towards diversification of the sources of its energy supplies. The decrease of indigenous production and increase in consumption is leading to higher demand for imported gas.

Every new source of energy leads to more competition and security of supply. There was also a more politicised angle of Europe’s diversification strategy – Brussels is de facto practicing avoidance of new Russian gas supplies and delivery routes.

Incidentally, avoiding dependence on a particular supplier might result in creation of new potentially challenging dependencies. A transit through Turkey may – in certain cases – carry its own political challenges, considering recent tensions between Ankara and Brussels.

Basically, all non-Russians routes and sources of supply (such as the TAP pipeline) got a “green light” from Brussels. For example, TAP was selected – among others – as a Project of Common Interest (PCI) in 2013, 2015, 2017 and 2019 for its role in opening up the Southern Gas Corridor, a major alternative route of supply for Europe.

Being identified as a PCI four times in a row signifies the EU’s solid political support for the pipeline supplemented by significant funds from the European and international institutions. For example, the TAP pipeline received 1 billion euro in loans from the EBRD and 700 million from the EIB Direct Facility. Washington also offered strong political support to the Southern Gas Corridor.

Even though more ambitious (and more political) Nabucco did not take off, natural gas from Azerbaijan has found its way to market in the framework of a more commercial project promoted by the private energy companies.

The launch of TAP pipeline is undoubtedly a significant achievement for Azerbaijan: TAP will help Baku to diversify its supplies, find new customers and capitalize on its gas reserves. It will also intensify Baku’s economic and political links with the European Union. Increased ties with Brussels might however come at a price.

Strong economic ties do not preclude strong criticism of a country’s foreign and domestic policies by the EU member states or Brussels as in the case of Russia. For example, when dealing with Russia, a significantly stronger energy player, Brussels has tried to leverage its position as a market for its gas even in situations where gas played no role.

Chris Miller, assistant professor of international history at the Fletcher School of Law and Diplomacy, observed that German policy today is “as tough on Russia as at any point since the Cold War.”

More specifically, Azerbaijan’s energy sector is likely to be impacted by the key element of the EU energy discourse. Discussions around decarbonisation, value chain emissions, methane leakage, etc., will be “exported” to Azerbaijan, and Baku should be ready to provide a timely response to these developments.

Additionally, European carbon border adjustment mechanism, commonly referred to as a carbon border tax, will be applied to the Caspian gas exports to Europe in the immediate future. Azerbaijan should not underestimate the importance and extent of this initiative and start developing its policy and regulatory response to the EU’s “green” instruments.

It is worth noting that the TAP pipeline was fortunate not to attract any serious political attention in Brussels or the EU capitals with a minor exception. The project had been contested by the 5-Star Movement, one of the parties in the ruling coalition.

In June 2018, Italy’s environment minister Sergio Costa told Reuters the project was “pointless”. The TAP has its dose of adrenaline, but its challenges never rose to the level of a geopolitical chessboard.

The “political waves” across the EU were surprisingly low, at least on the surface. The project developer had mostly to deal with construction and environmental issues and not to address political criticism and adverse regulatory changes, or respond to unjustified accusations.

For example, when the European Commission amended in 2018 the Gas Directive under the guise of harmonizing the rules (applicable to offshore gas import pipelines), the outcome was clearly meant to address only one single project (Nord Stream 2), reflecting the EU’s geopolitical preferences rather than any real need to iron out market distortions.

The TAP developers were able to realise a technically challenging project with pipeline crossing the mountains and the Adriatic’s seabed, and successfully avoid major social conflicts.

The construction of the TAP pipeline could set an example of what a project developer’s role should be – to build a commercial infrastructure project, while mitigating any potential environmental and social challenges.

Unfortunately, there are enough examples of European infrastructure projects, where the developer has been made the canvas on which the commercial reality of a market is being painted in broad strokes as a geopolitical rivalry.