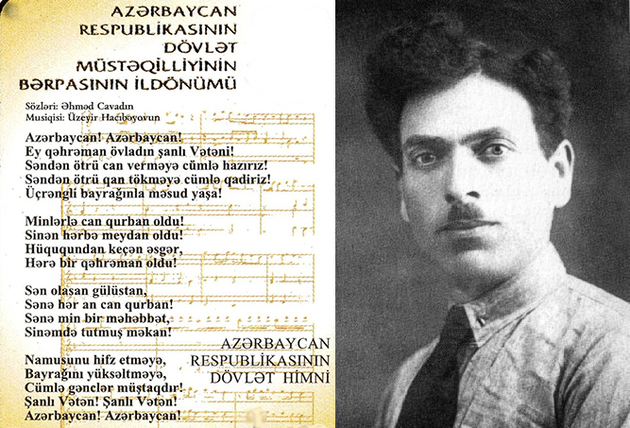 128 years ago, on May 5, 1892, poet Ahmed Javad, known for writing the words of the Azerbaijani anthem, was born. He lived only 45 years, but he is still remembered not only for his poems but also for his active civic stand. Javad was born in the village Seyfali of Shamkir district. For the first years, he studied at home - learned Turkish, Persian, Arabic and Oriental literature. At the age of 20, he graduated from religious seminary in Ganja and started working as a teacher.

Literary critics say that Javad was a lyricist who subtly felt all shades of his native language, skillfully recreated the feelings and thoughts of his contemporaries in simple and clear images. However, since 1918, when the Azerbaijan Democratic Republic (ADR) was formed, Javad became interested in politics: he was actively involved in the public life of his country, wrote poems that sound like a call to fight in the name of a high patriotic idea.

In those years, the young poet met with the journalist and playwright, leader of the Musavat party, Mammed Amin Rasulzade, who devoted his life to the idea of independence of Azerbaijan and unity of the Azerbaijani people.

Under the influence of Rasulzade, Ahmed Javad joined his party and wrote the ADR anthem to the music of Uzeyir Hajibeyov. At the same time, Javad continued to work as a teacher, actively helped the Minister of Education of ADR, Nasib Bek, in establishing the Azerbaijan University and continued to write wonderful poems.

After the Sovietization of Azerbaijan, Ahmed Javad concentrated on pedagogy - he taught Russian and Azerbaijani languages in the Narimanov Technical School.  Studying at the historical and philological department of the Azerbaijan Higher Pedagogical Institute, he became the Executive Secretary of the Union of Soviet Writers of Azerbaijan, headed the Department of Public Education of the Guba region and the literary department of the Ganja Drama Theater.

However, the poet’s relationship with the Soviet regime was controversial. In 1925, he was arrested, but quickly released - then the repressions were not as harsh as they turned out to be later.

After his arrest, Ahmed Javad was working a lot on translators. He translated into the Azerbaijani language Pushkin’s ”Copper Rider”, Gorky’s ”Childhood”, Turgenev’s prose, Shakespeare’s ”Otello”, ”Romeo and Juliet”, Rabelais’s Gargantua and Pantagruel, Hamsun’s ”Hunger” and even received an award for translating Rustaveli’s poem “The Knight in Panther’s Skin. ” But, of course, in the 1930s, Javad was occupied not only with translations. He was writing a lot, large and mature works. In his poem "Kura”, the river symbolizes the running of time, history of Azerbaijan, which survived the invasion of various kings, shahs and sultans. The poet calls on the Kura that was not conquered by foreign invaders, to humble before the people that have become the master of its fate. In "Singing Girl", Javad develops the lyrical-historical topic, talking about the girl who killed the tyrant, saving the country from disasters and devastation.

Perhaps, the new authorities found some unwanted hints in his poems, perhaps, recalled Javad's support for ADR, but in 1937, the poet was arrested for the second time. And this time everything turned out to be much more tragic than in 1925 - Javad was executed, his wife Shukriy was exiled to Kazakhstan, and their four children were separated.

In December 1955, Ahmed Javad was posthumously rehabilitated for lack of corpus delicti in the case. And 55 years after the death of the poet, in 1992, the Azerbaijani parliament adopted a law according to which the "Azerbaijan March" by Ahmed Javad was approved as a national anthem.

What we need to know about 1918 massacres of Azerbaijanis