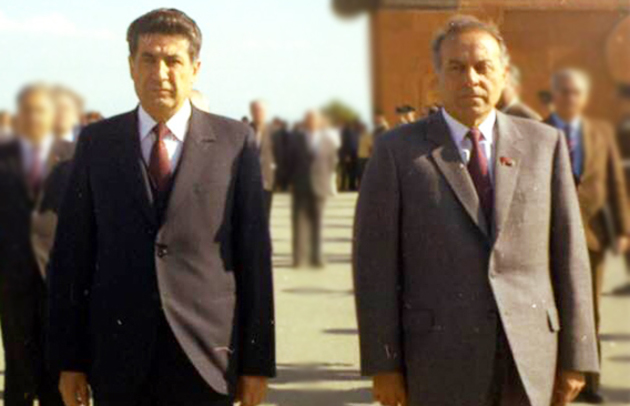 "Guys, issues are not resolved this way," they say that these were the last words of the Chairman of the Armenian Parliament Karen Demirchyan, addressed to his murderers - terrorists who bursted into the parliamentary hall on October 27, 1999.

A few months before Demirchyan's death, Azerbaijani President Heydar Aliyev told Armenian journalists: “In 1974 Karen Serobovich was elected First Secretary of the Central Committee of Armenia, we actively cooperated, helped each other, communicated. I remember my meetings in Armenia. With what enthusiasm, with what respect I was received, and not only by officials. I have been to collectives, factories, factories ... How many times Karen Serobovich has been here, in Azerbaijan. How many times have we talked about the friendship of the Transcaucasian peoples. "

In the late 1990s, negotiations were being closed to resolve the Karabakh issue. Then it seemed that through the efforts of Heydar Aliyev and Karen Demiryan, the problem could be solved, it would be possible to avoid new victims, enmity between nations, and destruction of the economy. But the Armenian war party was not interested in such a development of events, and they solved the problem simply and radically, giving the order to kill Demirchiyan.

Today, when it comes to the post-war restoration of the Armenian economy, one recalls the words of Karen Demirchyan about how the work in the state structures of post-Soviet Armenia was organized:

“Any random person was put on a leadership position, proceeding only from the fact that he was a member of the team. I believe that leadership is not playing football or basketball. This is a very serious and responsible job, and a leader is not a coach. he must be a guide, he must be a creator, in order to point the right direction in solving a particular issue.

Or they put an ignorant, random person on the post of minister. In our unfavorable economic situation, unfortunately, the leadership is absolutely incompetent in matters of economic development, it has no concept, no vision of industrial development. It's like a ship without a captain on a stormy sea. There are officials who understand what needs to be done, but there are those who are only engaged in imitation of work. Each official must have his own deeply thought-out concept, he must ensure the implementation of a set of important and serious measures. "

I would like to believe that now in Armenia professionals will be engaged in solving both socio-economic and political problems, for whom Karen Demiryan would not be ashamed.