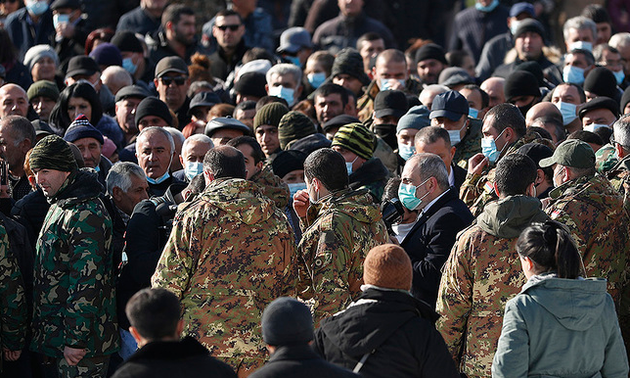 As the Trilateral Statement on Karabakh was signed on November 9th, 2020, appeals to hold early parliamentary elections in Armenia began to be constantly voiced. The clergy, the systemic opposition, conservative generalship, military criminals of the First Karabakh War, and the non-systemic opposition ("The Movement to Save the Motherland") stand for resignation of Prime Minister Nikol Pashinyan.

Chaotic protests in front of the National Assembly and noisy demonstrations of street “patriots” are accomplished by only one demand – to oust Pashinyan from Armenian politics. However, the determined non-systemic opposition has no serious electoral base to win elections.

The loud title of the political rally and equally loud protests are unable to hide political impotence of “The Movement to Save the Motherland” which cannot accuse Pashinyan of anything but the defeat in the Second Karabakh War. For sure, results of the last-year bloodshed were hard to take for the Armenian society and Premier was responsible for failing to prevent the war by timely deoccupation of the Azerbaijani territory. However, the heavy defeat of Armenia in Karabakh doesn’t rest only with Pashinyan’s mistakes because 25 years of occupation has formed a system of corruption and clannishness and its enormous apparatus which supported existence of the separatist regime.

Today pseudo-patriots from “The Movement to Save the Motherland” delicately keep silent when it refers to the Karabakh clan and take it out on vulnerable Premier who is in political isolation now. At the same time, “The Movement to Save the Motherland” plans to run for elections without a political program which is able to attract voters. Ousting Pashinyan from Armenian politics meets only interests of a backstage Armenian oligarch who sponsors the “patriotic” movement.

Ignoring importance of a thorough study of Armenia’s problems reveals elements of a typical political technological project with an Armenian accent in the non-systemic opposition. Pseudo-patriots can rely only on competition with the former president of Armenia Robert Kocharyan. Three years ago, during the Velvet Revolution, Armenia already made a choice against the Karabakh clan. Today go-getting non-systemic oppositionists want to privatize results of Pashinyan’s previous victory. Even though Armenian common people get largely disappointed with the revolutionary authorities, Armenian citizens won’t vote for the Karabakh clan.

Nevertheless, without Pashinyan’s participation, elections may reduce to a struggle between voters of “Savers” and voters of the Karabakh clan; and the agenda of “The Movement to Save the Motherland” can partially attract supporters of Premier. The logic is simple: an Armenian citizen chooses the lesser of two evils. That’s how street activists hope to repeat success of Pashinyan without him but using his methods.

Aliyev: "The rights of the Armenians of Karabakh will be protected, Azerbaijan will bring benefits to them”