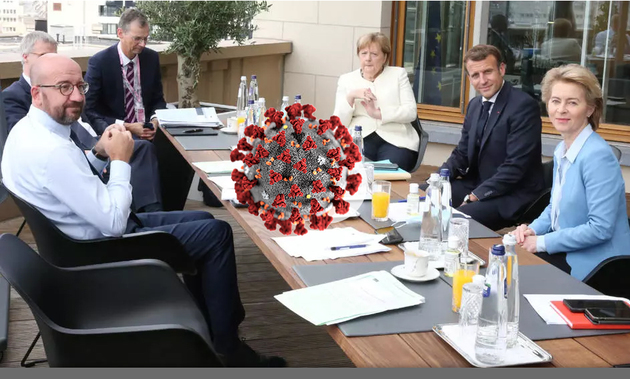 Divided EU leaders will meet again on Monday to try to agree the terms of a huge coronavirus economic rescue package after a night of tense haggling failed to yield a breakthrough.

France 24 reports in its article EU leaders deadlocked in talks over Covid-19 recovery plan that after three days and three nights of talks, the 27 states still cannot settle on the exact size and rules of a 750-billion-euro ($860-billion) bundle of loans and grants to help drag Europe out of a recession caused by the pandemic. The leaders gathered briefly on Monday morning after spending the night negotiating in smaller groups in pursuit of a deal, only to adjourn until 4pm (1400 GMT). French Finance Minister Bruno Le Maire said on Monday that he believed an agreement on a recovery plan could be reached. Le Maire also told French BFM TV that the future of Europe in the 21st century was at stake. "An agreement is possible. An agreement is a necessity", Le Maire said of the the European summit negotiations in Brussels.

Over a working dinner on Sunday night, summit host and EU Council President Charles Michel made a fresh effort to win over the coalition of "Frugals" - the Netherlands, Sweden, Austria, Denmark and Finland - which has sought to cut the size of the package and impose strict rules on how it is used. As fears grew that the summit would collapse without agreement, Michel suggested cutting the grant portion of the deal to 400 billion euros - down from his initial proposal of 500 billion - and raising the loan part to 350 billion, up from 250 billion. But this was not enough for the Frugals, who insisted grants be cut to 350 billion and demanded big rises in the rebates they get on their EU contributions.

Tempers flared as frustration boiled over after a full weekend of haggling, with French President Emmanuel Macron upbraiding the Dutch and Austrian leaders for their intransigence and threatening a walkout. The French leader banged the table and accused Dutch Prime Minister Mark Rutte of behaving like former British premier David Cameron - who took a hard line at EU summits but ended up leading his country into a referendum to quit the bloc, and losing his job.

Macron, who was pushing for grants to stay at 400 billion, said he would rather walk away than make a bad deal. In a bid to break the deadlock, Michel came up with a new proposal on Monday morning, which a diplomat said could be a "route to a deal". "A plan with 390 billion in grants but smaller rebates for the Frugals," a European official explained. In a promising sign for Michel's new plan, Austrian Chancellor Sebastian Kurz tweeted his approval. "Tough negotiations have just come to an end, we can be very satisfied with today's result," he wrote. Round after round of small group meetings went on all day Sunday as Michel, aided by Macron and German Chancellor Angela Merkel, tried to drag the Frugals and the more indebted - and virus-ravaged - on board for a compromise, but progress was painfully slow.

Rutte wants member states to have a veto on national economic plans by the likes of Italy and Spain, in order to oblige them to pursue reforms to borrowing and their labour and pensions markets - an effort that was angrily resisted by Italy. Over dinner, Michel made a heartfelt speech reminding leaders of the devastating human cost of the pandemic - 600,000 dead including 200,000 in Europe - and urged them to come together to complete what he called a "mission impossible". "The question is this: are the 27 leaders, responsible for the people of Europe, capable of building European unity and trust?" Michel said, according to a copy of his remarks seen by AFP. "Or will we present the face of a weak Europe, undermined by mistrust?"

Meanwhile, another obstacle emerged when Hungary's hardline premier Viktor Orban accused Rutte of waging a personal vendetta against him and his country - and vowed to prevent any agreement on efforts to tie EU spending to recipient countries' respect for EU standards.